CHANGING THE FACE OF GLOUCESTER, ONE BUILDING AT A TIME

One man, Ezra Lunt Phillips, changed the face of Gloucester,  There is no doubt about it.

My acquaintance with the legacy of Ezra Phillips began about 1987.  At a yard sale I discovered a photograph printed from a glass plate negative.  It was labeled, "Ezra Phillips in his new car".

At that exact same time a Gloucester couple, Susan and Rick Richter, were restoring a large house on Edgemore Rd.  My friend was curious and said, "Who do  you suppose that is?".  To which I replied that I knew who he was...the architect of the very house on Edgemore Road that was built at the turn of the 20th century and in 1987 being restored.  I had seen the original plans with his name on them.  Only then did I realize the image of Ezra Phillips depicted him sitting in his new car and looking a Balmaha, still under construction.  The same beautiful house that was then, in 1987, being restored by the Richters.

This was the beginning of my interest in the life and work of Ezra Phillips.  I purchased the photo.  It was copied and shared with the Richters, their brokers, the new owners and others.  It was a wonderful coincidence and incredibly timely.

Ezra Lunt Phillips was born Fed. 9, 1870.  The family then lived at 17 Washington Square.  His parents were Nathan and Maria.

Ezra's father was a successful flour dealer.  His business was on the right hand corner of what is now Main St. and Duncan Street.

By the early 1890s Ezra had opened an architecture office at 4 Pleasant St. and was still boarding at home but by 1896 he owned the property on Gloucester Avenue that was to be his home for the rest of his life.  The address changed several times but it was always the same house.

He was now married, his wife was named Grace and they had two children, Elizabeth and Nathan.

By 1902, after living for many years on Washington Square, his father, Nathan and mother, Maria, moved to the large house at 159 Washington St. on the corner of Derby Street.  This is a lovely house but it is not known if Ezra had a hand in its building or renovation.  The family also had a summer home at Agamenticus Heights, (Wolf Hill area) overlooking the Russia Cement Company, (LePages) with which they family was involved.


Ezra Phillips throughout his life contributed more than his architecture to the community. He was very active at Trinity Congregational Church and the YMCA.

In addition to volunteer organizations he was vice president of the  Gloucester Safe Deposit and Trust  Co., the Cape Ann Savings Bank, treasurer of the Cape Ann Anchor works, Russia Cement Co. (LePages) the Gloucester Coal and Lumber Co, the Rockport  Granite Co. and a charter member of the Rotary.  Where did he find time to design all the beautiful buildings?

Nathan Phillips passed away in 1905 but his widow, Maria, continued on living in the large house on the corner of Derby Street.

By 1926 Timothy Holloran had joined the architectural firm which then became known as Phillips & Holloran.  They continued as partners at least through 1935.  Ezra Phillips died in 1937 and Holloran continued on alone.

But during all these years there was a miracle in the making.  Ezra Phillips never threw away a single plan and neither did his partner, Timothy Holloran.  They were carefully kept and after the death of Timothy this treasure trove, like a pot of gold, descended to Robert Holloran who  thoughtfully preserved them.

Robert Holloran died at a very old age in  2008 and in 2011 the plans were given to the Cape Ann Museum.  Here is what is so astonishing.  There were more than 300 plans mostly for local buildings!  Is it hard for you to get your head around this?  There are existing plans for 300 of some of the best and most beautiful buildings on  Cape Ann.  These plans span the period from about 1890 until the middle of the 20th century.

Municipal buildings include renovations to the former town house, now known as the American Legion building in preparation for the returning veterans of WWI.

There were renovations to Central Grammar, originally built by another native son, Tristram Griffin of Malden.   He designed several substantial bank buildings on Main St. 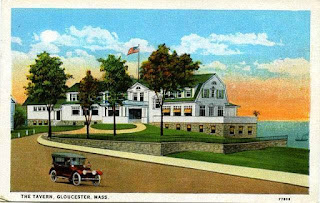 He built at least one hotel, the Tavern, on the Boulevard that replaced the Surfside.

In short any building of any consequence renovated or built during more than half a century can usually be credited to Phillips or to Phillips & Holloran after they became partners.

And how about the countless private residences for which they were responsible?

Gloucester houses.  Examples of his work.

When all is said and done we now have concrete evidence of the magnitude of the work of Ezra Phillips and continuing with the firm of Phillips & Holloran.  Three hundred plus set of drawings documenting the development of this city for more than half a century.  What a wealth of information is stored in those tightly rolled up sets of plans.  Plans that thankfully have found a permanent home at the Museum.  What a legacy for Gloucester!

Ezra Phillips funeral took place at Trinity Church on Middle Street.  Rev. Dwight Cart conducted the service in the place where  Phillips had long been a deacon.  He was assisted by the former pastor,  Rev. Dr. Albert A. Madsen and Rev. Dr. Edmund A. Burnham pastor of the Essex Congregational Church.

He went on to describe Phillip's life as "well designed with nothing cheap and shoddy in its  building.  A life founded upon faith, built upon quiet service, enhanced by joy and humor, active, alert, community-minded, true to friendship, honest and sincere.  One who loved many things and served many interests tirelessly, but whose first love was still his last...his home, and those who have made these wall live by the constancy of their service and affection.

Few of us have realized that in almost any neighborhood in the City of Gloucester one could look around and probably see the fruit of the three hundred sets of plans designed by him and his partner. But thanks to the museum, they have developed a master list and the buildings can be identified.  His buildings are everywhere in Gloucester.  Ezra  Phillips did change the face of Gloucester.

Here is an example of how he can still contribute eighty years after his death.

The Sawyer Free Library is in the midst of discussions concerning the expansion of the library or complete replacement.  One of the sections of the library, the stacks section, was built in 1913.  It's future is up in the air.  The building committee turned to the Cape Ann Museum and of course, it was predictable that they would have the plans for the "fireproof" building.  In ascertaining its value this new information about its fireproof construction adds another element in the evaluation and worth of the building.  Fireproof?  Who knew?

After the plans arrived in Gloucester at the museum I had the pleasure of trying to track down his descendants.  After making calls to places in Vermont and in New York state I finally found his grandson in Northbridge, MA.  Although in his eighties, William Christopherson was still very active.

When I reached him I asked him if he had any heirlooms or trinkets that had come down to him from his grandfather.  He told me that he had one thing that belonged to Ezra.  I should have been sitting down when he said, "I have his last automobile."  One could predict after looking at that early photo of Ezra in front of Balmaha that he would have a special car.  It was a name I had never heard.  It was from the late 1920s and a rare and expensive roadster.  His grandson was perhaps seven or eight years old when Ezra died but he begged his mother to keep the car.  She did keep it and can you believe that it is in perfect condition and still on the road!  I don't think it gets driven much but the fact that he still has it makes me smile.  Now if I could only think of the name.

We must remember Ezra Phillips for his contributions to his hometown and for all he accomplished in and for the City of Gloucester.

He quietly changed the face of the City, one building at a time.

Posted by prudence fish at 6:33 AM